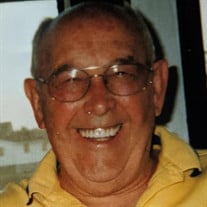 Stuart Vaughn Ames, Sr. - February 16, 1926 - February 5, 2020 S. Vaughn Ames, Age 93 from Mosherville, PA and recently from Simpsonville, SC, son of the late Judson and Matilda Ames, peacefully passed on to Glory to be with his Lord and Savior Jesus Christ after a lengthy illness. He is survived by his loving wife of 69 years, Joanne Grow Ames; his sons, Stuart Jr. (Lori), Jeffry (Melissa), and J. Mark (Carol Lee). His youngest son Douglas was killed in a tragic traffic accident in 1985. He is also survived by grandchildren Stuart 3rd, Shelby, Andrea, Joshua, Bethany, Jeffry, Jennifer, Ian, Grace, Amos, Elise, and Owen as well as many great-grandchildren, nieces, and nephews. He was predeceased by his siblings: Naomi, Ronald, Lucille, Leonard, Donna, William, Harold (Bud), and Glen. Vaughn enlisted in the U.S. Navy in 1942 during World War II, serving aboard a Destroyer Escort stationed in the North Atlantic searching for German submarines. He was a boatswain’s mate and served honorably. He retired from Linn S. Chapel Lumber after over 40 years of service. After his retirement he accepted a position with Lowes, Inc., and finally retiring at the age of 79 at the behest of his family. He was also a skilled cabinetmaker. Vaughn was a long time member of Mosherville Baptist Bible Church, serving as a deacon. Vaughn was so proud of his wife and family, especially “his boys” and loved spending time with his sons and their families. Nothing made him happier. He was loved by all who knew him and was a good friend to many. A memorial service will be held on Saturday, February 15, 2020, at 1:00 in the afternoon at Grace Community Bible Church, 604 South Street, Simpsonville, SC 29681. Palmetto Cremation Service, Pickens, SC

Stuart Vaughn Ames, Sr. - February 16, 1926 - February 5, 2020 S. Vaughn Ames, Age 93 from Mosherville, PA and recently from Simpsonville, SC, son of the late Judson and Matilda Ames, peacefully passed on to Glory to be with his Lord and Savior... View Obituary & Service Information

The family of Stuart Vaughn Ames created this Life Tributes page to make it easy to share your memories.

Send flowers to the Ames family.