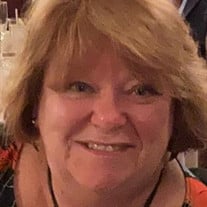 Elise Anne Crosby, born January 1, 1953 in Ironton, Ohio and died September 26, 2021 in Central SC. Elise is survived by her husband Jim Wentink, son Ross Summerland, Ross’s wife Laurie, and Elise’s two grandsons Matthew and Andrew. Elise is also survived by her brother Phil Crosby and his wife Sharon. Elise’s mother Ruth Crosby and father Ed Crosby preceded her in death. Elise worked in several hospitals as an X-ray Tech. Many a doctor favored her to take the X-rays, and she could read them as well as the doctors. She was working her shift at George Washington Hospital the day President Reagan was brought in following an assassination attempt. She also worked at the Betty Ford Breast Diagnostic Center in the District of Columbia taking sonograms etc. It was there that Elise had the opportunity to meet Betty Ford and President Ford, and she was at one point featured on television for her work at the Center. Elise was a great cook and always took command of the kitchen and any situation. She loved music and good wine. She had a terrific sense of humor. Elise was no stranger to hard work, and you could often hear her sing “Green Acres” as she rode her lawn mower or drove the tractor to bush hog the fields. She loved sitting on the front porch reflecting on life, while listening to and singing along with the Southern Wesleyan University chimes. She had a beautiful voice and at one point sang with The Christian Center and Jubilee Worship Teams in Virginia. Elise was a faithful friend, generous and big hearted. When she visited friends and family, she always brought enough food and wine to recreate “The Last Supper”. Her family and grandsons were her true jewels. Tragic as it is that her life was cut short, her vibrant soul lives on. We will see her spirit on the James River and feel her presence on Wentink Road taking care of the land and home she loved. Her cats are among those who miss her terribly. She was larger than life, and it is with much regret that we will no longer see her on this earth. However, we know she will be with us as she journeys to heaven. We are all so sad but will focus our attention on the fact that we had such a wonderful person as Elise in our lives and be grateful for the time we spent with her and the abundance of wonderful memories we hold forever.

The family of Mrs. Elise Ann Crosby created this Life Tributes page to make it easy to share your memories.

Send flowers to the Crosby family.