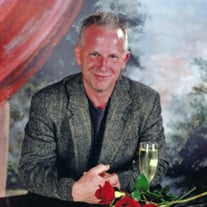 Robert E. Perdelwitz, Jr. age 65, of Seneca, SC., formerly of Princeville, IL. died September 8th of Glioblastoma Brain Cancer, commonly known as GBM. He had been battling the disease for which there is no known cure for 1 year. Born October 19, 1954 in Peoria, Illinois, he grew up in Princeville where he loved and raised a family before relocating to South Carolina. Robert attended Princeville HS, followed by Black Hawk College, and earned his degree from Illinois Central College. He enlisted in the Army Reserve in 1977. He was a longtime member of the First Presbyterian Church of Princeville (Illinois) where he served as a deacon and an elder. In South Carolina he attended Pickens View Wesleyan Church. He is survived by his loving wife of 40 years, Heidi (Miller), one son and daughter in law, Jason & Lisa Perdelwitz, with one granddaughter Victoria of Mount Pleasant, SC., one daughter, Stacy Perdelwitz, with one grandson Landon of Seneca, SC., and one aunt, Ruth Dietrich, (Mackinaw, IL.) He was greeted in Heaven by his father, Robert E. Perdelwitz, Sr., his mother, Betty M. (Guth) Perdelwitz, his sister, Donna M. Perdelwitz and his grandparents, Reinhold & Clara Guth, and Fred & Matilda (Wirth) Perdelwitz, all who preceded him in death. Robert loved working; he was employed with FMC Corp (Wyoming, IL) for 21 years, and worked for Export Packaging, Inc. after relocating to SC. He also worked with Faith Properties in Anderson, SC. He continued his own residential remodeling business, enjoyed woodworking, spending time at the beach and was an avid wine maker. A funeral service is scheduled for September 26th, at 11:00am with a reception of friends immediately following at Pickens View Wesleyan Church 744 Bethlehem Ridge Road Pickens, SC. Memorials may be made to the church, or to a scholarship fund set up on his behalf.

Robert E. Perdelwitz, Jr. age 65, of Seneca, SC., formerly of Princeville, IL. died September 8th of Glioblastoma Brain Cancer, commonly known as GBM. He had been battling the disease for which there is no known cure for 1 year. Born October... View Obituary & Service Information

The family of Robert Earl Perdelwitz Jr. created this Life Tributes page to make it easy to share your memories.

Send flowers to the Perdelwitz family.