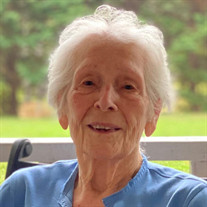 Easley, SC - Ritta Burckhardt was born one of seven siblings in Eislingen, Germany on July 29, 1930 to Maria (Stehle) and Ignaz Burckhardt. On March 24th, 2022 at the age of 91 she went through Heaven’s Gate. In her own words she “lived a good life and did many things that most will not”. Ritta was a remarkable, strong-willed woman and her life was defined by her strength. Hard work and honesty were virtues that she lived by. Being happy with only what you need and loving her family and friends were the most important things to her. After spending her childhood living through World War II she boarded a ship to the United States in 1950 by herself at the age of 20. She met Josephine Defelice shortly after arriving and they became fast lifetime friends. The ways of living in the U.S. were learned from Josephine’s Italian family and Ritta quickly became a U.S. citizen which is one of her proudest accomplishments. She was a skilled seamstress and worked in a factory in Pennsylvania for a short time. Later she worked as a travel agent for Eastern Airlines. People loved her and as a travel agent she was so successful she won many trips all around the world. Ritta loved to travel. Ritta married in 1963 and a short time later Daphne, her only child, was born. They traveled where work took them and lived in many places all over the U.S. Ritta and Daphne settled in North Georgia in 1975 and remained there until recently. They relocated to Easley, South Carolina in 2017 when Daphne met her husband, Kenneth Tirey. Ritta spent her final years in the care of Daphne and Ken enjoying her well-deserved retirement years. Ritta never met a stranger. To know her was to love her. When her only child had her only child, Tiffany, she became “Oma” (German for grandmother). She was known as “Oma” to all of Tiffany’s friends and others who she was close to. Ritta loved to sew and was always making clothes or doing alterations for family and friends. Sewing brought such satisfaction that she continued to sew long after retirement. Ritta Burckhardt is survived by her daughter Daphne and Daphne's husband Kenneth Tirey; her granddaughter Tiffany and Tiffany's husband Heath Jarrett; her two great-grandsons Kolby and Xander Jarrett; her niece Marilyn Smith and nephew Shaun Smith; her sister Susi; and her nephew Uwe and his wife Gisela Rommel. The family will have a private celebration of life at a later date where they will gather on the coast of the Atlantic Ocean to scatter her ashes. Her wish was for the ocean to return her to the coast of her homeland, Germany. If you are so inclined, in lieu of flowers a memorial donation to the Alzheimer’s Association, American Heart Association, or Samaritan’s Purse is appreciated. Palmetto Cremation Service is assisting the Burckhardt family. Online condolences may be made at PalmettoCremationService.com

The family of Ritta Burckhardt created this Life Tributes page to make it easy to share your memories.

Easley, SC - Ritta Burckhardt was born one of seven siblings...

Send flowers to the Burckhardt family.