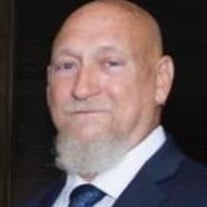 PICKENS SC - George (Butch) Medvar, 72, passed away unexpectedly on December 13, 2021. Born in New Brunswick, NJ on August 23, 1949. He lived in South River prior to moving to Dover in 1982. In 2012, he moved to Pickens, SC. He was a loving husband to Pamela (Bowman) for 40 years. He was a retired auto mechanic, an Army veteran, and loved gardening. Survivors also include his daughters Mary Blais (Ricky), Barbara Medvar (Jeff Dimond), and Joan Swanton (Jim), sisters Marilyn Medvar Franklin, Judith Medvar, and Laureen Medvar, grandchildren George, Garrett, Grant, Mila, and Sloane, in addition to nieces, nephews, neighbors, and friends. Butch is preceded in death by his granddaughter Genevieve, sister Susan, and brother Thomas. Memorials are planned for a later date in both South Carolina and New Jersey.

The family of George "Butch" Medvar created this Life Tributes page to make it easy to share your memories.

Send flowers to the Medvar family.